Can a method be passed as a parameter to another method in C#? Sure… Why not…

Part One (basics):
The official definition of delegate is: A delegate is pointer to a function. Nice and simple description. You can view it as a blueprint for a function that you intend to pass. The return type, and parameters of a function and delegate which points to that function, must be the same. Sounds a wee bit confusing. Take a look at the picture bellow: 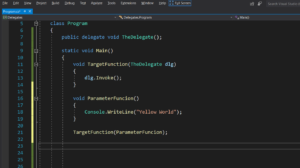 We have a delegate called TheDelegate that returns nothing and takes no parameters. Then we have TargetFunction() that takes our delegate as a parameter. Well, it can take any method that has the same declaration as TheDelegate. Finally, we made a ParameterFunction() that has required identical declaration as our delegate, and we passed it as a parameter. When you run this, “Yellow World” will be printed out.
Check the picture bellow. I’ll be using this from now on to keep he code cleaner: 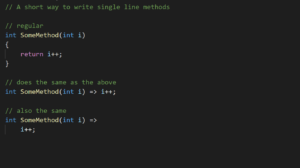 Now let’s make a few modifications. Suppose we don’t want to hardcode “Yellow World”, but we want to print an incoming string: 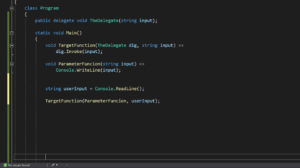 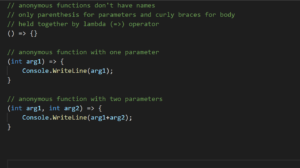 So we can even avoid declaring ParameterFunction, and write everything like this: 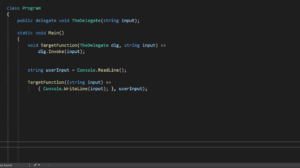 Delegates can return values as well: 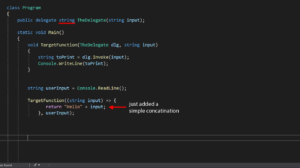 This will print “Hello” plus whatever the user entered.

.Net already has two types of delegates built in, so you don’t have to declare one yourself. One is called Action<T> the other is Func<T, TResult>, where T is parameter and TResult is return type. Action is used for delegates with void return type, while Func returns something (TResult).
Here is the basic setup: 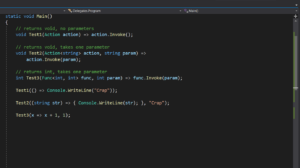 If you’re confused by this Test3() method, I’m getting to it.

Part Two (method fields)
When we create a class, we usually make something like this: 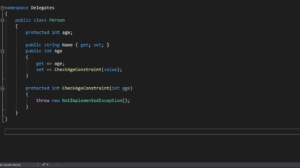 Imagine if we could make this CheckAgeConstraint… uhm… gettable and settable, just like any field in a class, so you can change what is acceptable on the fly. I’m not saying that this is a good idea, I’m just saying that it is possible.
So, we are making software for human trafficking organization ( work for those who pay the most), and we need to find a way to check and store humans that are suitable for child labour. Between 6 and 14 years old. Lets modify the class: 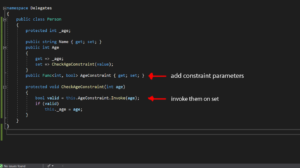 Now to use it:

So there… You can make… delegated properties so to speak, that can change object’s method behaviour. All of this is also applicable to both Action<T> or pure delegate. How are you gonna use it, is up to you.